Retro Model Sari
Duesseldorf, NRW, Germany
Iam a German 40s/50s/60s Pin up Girl, Retro Addict and Weirdo. I love make up, to craft, do photoshootings and collect vintage clothes/ lingerie. In my blog you can read all about it, mashed up with my thoughts about fashion/styling.

Once upon a time...
there was a little country girl named Sari, growing up in the terrible wilderness of Odenwald (That is one hour behind Frankfurt, almost at the Bavarian border in the middle of nowhere). She was allways different and couldn´t even tell why. "Why are you so weird?" did the farm girls ask while the farm boys lit their torches. "I had no idea Iam beeing weird at all!" said Sari and ran off cause this was no safe place to be.

She ran off to Düsseldorf, which is way more far away from Frankfurt, unless you take the Intercity Express. Beeing in a city her weirdness did not stand out as much as it used to.

That was until she found a magic pin up book and started to do pin up modelling... 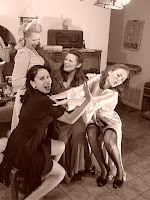 8 years of Pin up - not one moment of regret!